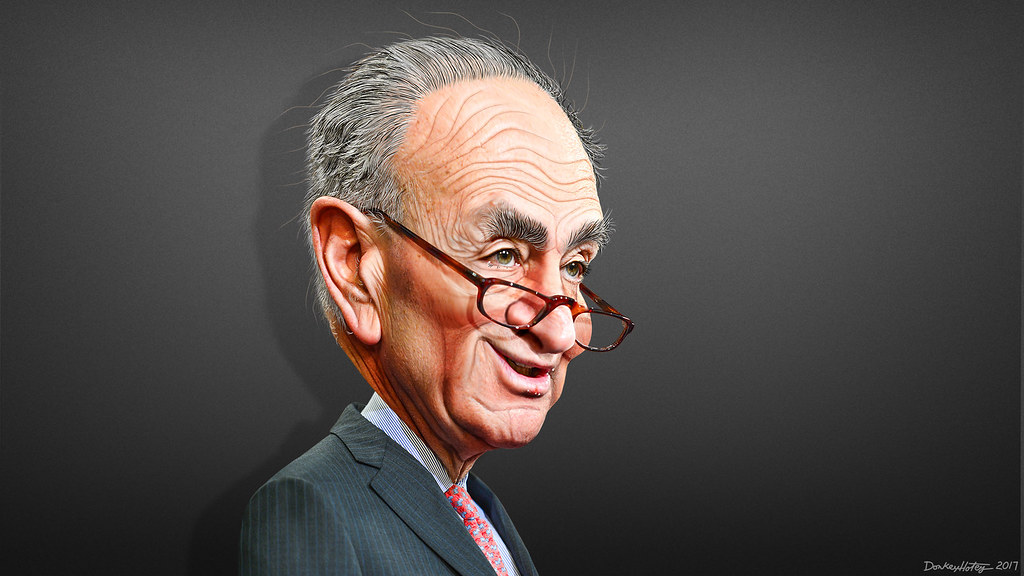 Republicans have pointed out that most Americans receiving the $600 weekly unemployment insurance benefit are earning more not to work than they did in their previous job. An analysis from the Becker Friedman Institute at the University of Chicago found that 68 percent of unemployed workers earn more on unemployment than in the workforce. As the number of job openings increase, the lack of available workers is concerning.

Legislation recently offered by Sens. Ron Johnson (R-Wis.), Mike Braun (R-Ind.), and Rick Scott (R-Fla.), the Coronavirus Relief Fair Unemployment Compensation Act, would have given a state the option of choosing a $200 weekly unemployment insurance benefit, in addition to the benefits the state provides, or plus up equal to two-thirds of an individual’s previous wage. The plus up would be capped at $500 per week.

During a speech on the floor of the Senate, Schumer criticized Republicans’ concerns about the budget deficit. The Congressional Budget Office (CBO) scored the unemployment insurance provisions of the CARES Act, which passed back in March, at $268 billion. Republicans have been more concerned about the House Democratic Caucus’s HEROES Act, which would extend the current weekly unemployment insurance benefit of $600 through the end of January 2021. After blocking the passage of the Johnson-Braun-Scott unemployment insurance proposal, Schumer, of course, tried to pass the $3.5 trillion HEROES Act by unanimous consent.

The cost of the HEROES Act has an estimated cost of nearly $3.5 trillion. Considering that Congress has already passed four other legislative responses to COVID-19 at a cost of $2.4 trillion, the concerns about the deficit are real. As we recently noted the federal budget deficit for FY 2020, if it were its own economy, would be the seventh-largest economy in the world. The fiscal year isn’t quite over, and Congress may still pass another costly legislative response to COVID-19. We only wish Republicans cared about federal spending all the time; not only some of the time.

Schumer didn’t stop with bashing Republicans over unemployment insurance. He brought the Tax Cuts and Jobs Act, the 2017 tax reform law, into the discussion. “Now we hear talk from the other side that...this increases the deficit. We can’t spend money,” said Schumer. “Well, I would remind them of the $1.5 trillion tax cut for the rich — tax cut for the rich. No one even thought about the deficit then.”

The irony is that Schumer is trying to include the repeal of the cap on a tax deduction in the next COVID-19 bill that largely benefits higher-income earners from tax-happy states like New York, New Jersey, and California. Speaker Nancy Pelosi (D-Calif.) also wants to repeal the cap on the deduction.

Prior to the passage of the Tax Cuts and Jobs Act in December 2017, tax filers who itemized could claim their state and local taxes (SALT) as a deduction, reducing their overall tax liability. The SALT deduction allows tax filers to deduct their state and local income tax or sales tax and property tax. The Tax Cuts and Jobs Act capped the deductibility of SALT at $10,000. Capping the deduction not only raised revenue to help offset losses in revenue from the tax cuts.

The uncapped SALT deduction had a perverse effect because it incentivized states to increase taxes, knowing that higher-income earners could deduct their state tax liability on their federal tax filing and, thus, lower their overall federal tax liability. The cap on the SALT deduction put in place by the Tax Cuts and Jobs Act means that higher-income earners feel a far greater share of the burden of high-tax states like California, New Jersey, and New York. Because fewer lower- and middle-class tax filers claim the SALT deduction, they tend to feel the full weight of state and local taxes.

Looking at the most recent tax data available, in tax year 2017, there were 152,455,900 tax returns filed. Nearly 31 percent of tax filers chose to itemize their deductions rather than take the standard deduction. Reasons for itemizing can vary. A tax filer may own a business or be self-employed, and he or she may lower her taxable income more by itemizing. Overall, though, itemized deductions reduced tax liabilities by $1.4 trillion in tax year 2017. The SALT deduction lowered taxable incomes by nearly $608.7 billion.

Three states — California, New Jersey, and New York — represented roughly 21 percent of the population in 2017 but yielded 40 percent of reduction in tax liabilities from the SALT deduction. Higher-income tax filers stood the most to gain from SALT, particularly when it comes to state and local income taxes. 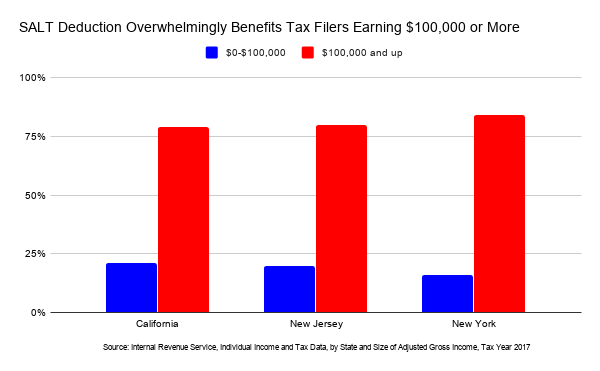 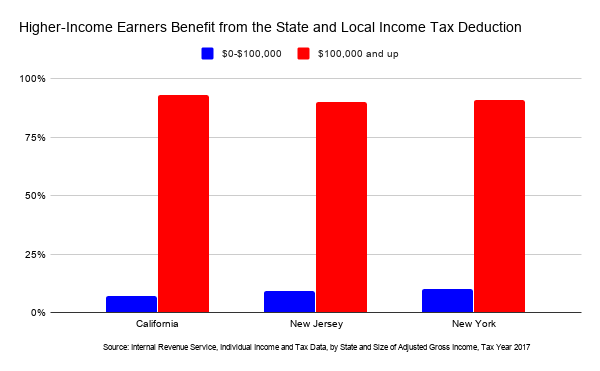 Schumer and Pelosi may rail against tax cuts for the rich, but their constant push to repeal the caps on the SALT deduction is exactly what that is. Such a move would amount to no more than a disingenuous back-door bailout for high-tax blue states, at the expense of the rest of the nation.

To be clear, at the federal level, the top 3 percent of income earners pay 52 percent of all income taxes. They pay more than their fair share. But the federal tax code should not be used to subsidize the tax burdens of states with high taxes, providing a shelter from that tax burden while leaving lower- and middle-class tax filers exposed to the burden.