Rep. Paul Ryan, the Republican Chairman of the House Budget Committee, has released his new budget plan called The Path to Prosperity: A Blueprint for American Renewal. His plan does contain some praiseworthy proposals such as cutting the corporate tax rate, repealing ObamaCare and ending forms of corporate welfare. However, it does not cut a single federal department and doesn’t balance the budget until 2040. Paul Ryan’s plan has received tons of media attention but it’s difficult for me to get very enthusiastic about a plan that would take nearly three decades to balance the federal budget.

While the Ryan plan is certainly preferable to President Obama’s  budget, it is not as bold as the budget plan introduced by Rand Paul, Mike Lee and Jim DeMint in the Senate. Rand Paul’s plan known as a Platform to Revitalize America would slash four federal departments and balance the budget within five years without raising taxes. Now, we’re talking. The Department of Education, Energy, Commerce and Housing and Urban Development would be axed under the plan. Unfortunately, the media has largely ignored this true fiscally conservative budget.

Believe it or not, some people think that even Paul Ryan’s budget is “too extreme.” The progressive blog ThinkProgress is spreading dishonest information about the Ryan plan. A blog headline on their website reads “Paul Ryan’s Budget Includes $3 Trillion Giveaway to Corporations, The Rich.” 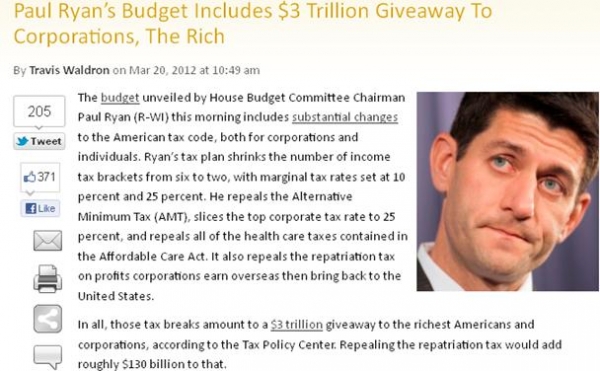 The blog’s author Travis Waldron writes that, “he repeals the Alternative Minimum Tax (AMT), slices the top corporate tax rate to 25 percent, and repeals all of the health care taxes contained in the Affordable Care Act.  It also repeals the repatriation tax on profits corporations earn overseas then bring back to the United States. In all, those tax breaks amount to $3 trillion giveaway to the richest Americans and corporations, according to the Tax Policy Center.”

First of all, tax cuts are not “giveaways.” Think about this flawed statist logic for a minute. The author is implying that all of our wages belong to the government. He does not consider your wage to be your property. The government will decide if you can keep the fruits of your own labor. If the federal government lets you keep more of your paycheck, it is “giving you” money. You haven’t earned it.

That clearly isn’t the case. Our wages belong to us. When the government cuts taxes, it takes less of our hard-earned money.  We are able to keep more of our paycheck without punishment from the IRS. ThinkProgress often claims that tax cuts "cost" money. But as Sheldon Richman writes, “tax cuts don’t cost money; government programs do.”

It’s our money, not the government's.

Subsidies and bailouts are real examples of government giveaways to rich Americans and corporations. Perhaps ThinkProgress should rethink their support for the Troubled Asset Relief Program (TARP) which gave hundreds of billions of taxpayer dollars to big, politically-connected banks. ThinkProgress bloggers continue to spread the lie that taxpayers profited from TARP. Not true.

ThinkProgress is spreading deceitful talking points about the Paul Ryan budget plan. But the Ryan proposal still leaves something to be desired. Rand Paul’s proposal is the only budget introduced so far that will eliminate federal departments and balance the budget in the near future. Not decades down the road. If Republicans are serious about cutting government spending, they should stand behind Rand Paul's budget.

I don't think Ryan is the conservative that he claims to be, or is given credit for. There are at least a few plans that balance the budget in a lot less then a quarter of a century. Does anyone really believe that any congress will stick to a 25year plan when they can hardly stick to a 25min plan?

0
07/14/2020
"For Liberty and Justice, Thank Rand Paul"
"https:\/\/www.freedomworks.org\/content\/liberty-and-justice-thank-rand-paul?social=facebook_share"
"Sen. Paul has continued to prove that he is a leader when it matters."
https://fw-d7-freedomworks-org.s3.amazonaws.com/styles/thumbnail/s3/field/image/FW-LibertyJusticePaul.png?itok=dCgHhmBh
Blog