There Is No Fiscal Victory in the Omnibus

The omnibus bill being fast-tracked through Congress increases spending.  This simple fact apparently escapes some members of Congress, several of whom have been telling their constituents that the bill was a victory because our spending levels are now lower than in recent years.

The House Appropriations Committee is using the following chart as proof that conservatives have scored a major victory (the red edits are ours): 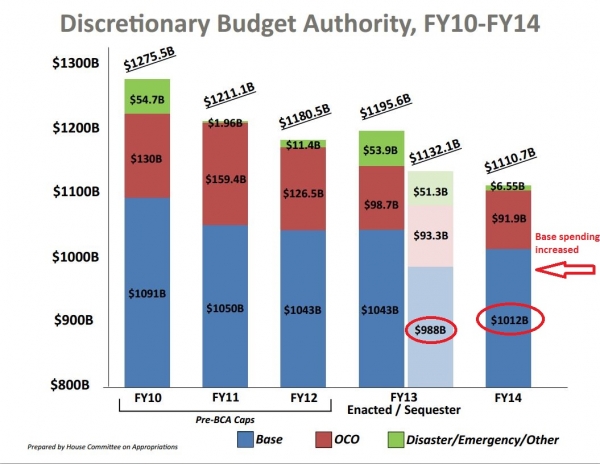 While it is absolutely true that the total spending level for 2014 is less than last year, the chart plainly shows the problem - the actual on-budget discretionary spending (the blue segment) has actually increased.

The red and green bars represent "emergency spending", meaning that it's spending that doesn't count towards the total authorized by Congress' budget. The red bar, Overseas Contingency Operations (OCO), is wartime military spending, going down naturally because of drawdowns in Iraq and Afghanistan.  The green is for other emergencies such as disaster relief - most of last year's was for the response to Hurricane Sandy.  This green bar could bump up at any time if there is a natural disaster and Congress decides to authorize more emergency funds.

The blue bar is what this omnibus spending bill could control, and it has grown bigger for 2014 because Congress is disregarding $45 billion of the sequestration spending cuts. The whole point of the sequester was to reduce this discretionary spending, and then to keep it down.

If some lawmakers don't see how this is a problem, this is the simplified version of the above graph, with only the non-emergency spending. 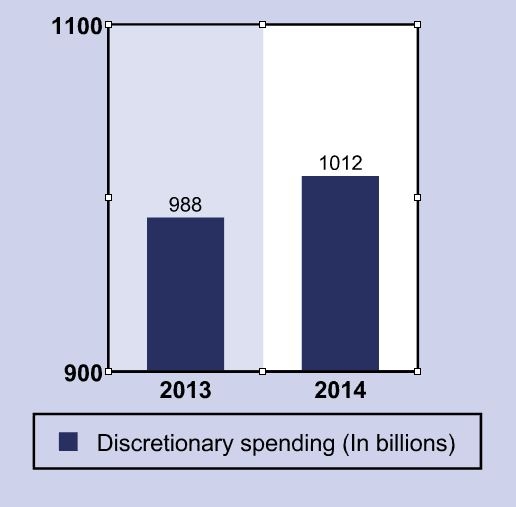 So don't let your members of Congress distract you by talking about how much less they're spending than in 2010, when the government was at the peak of one of its biggest spending sprees in history.  Since 2011, discretionary spending was going down every year - until Congress raised it this week. Period.

At least the guilty Republicans could have the backbone to admit it.

it's true that the wealth around DC is intoxicating and Republicans are the party of big government just like Dems.

Prior to Barry Goldwater, it was simply that. Then Goldwater misguidedly sided with Southern states on the states rights which was code for segregation. We lost the black vote, LBJ gave them the Great Society and they never looked back.

Nixon took us off the gold standard so the Fed could issue fiat currency with out limit.

Reagan was a relief from this but Bush 41 was the Rockefeller Republicans' candidate and internationalism was born again. Bush 43 was no better and spent like a drunken sailor.

Now Obama and we all know the sins of Dems and Repubs.

They have a political class to feed and reelections to finance with our tax dollars.

Yeah. The Republicans allowed the restoration of the sequestered spending. They lost ground on this budget. The parties don't like to actually cut spending because spending buys votes. The members of Congress are not working for us, the taxpayers.

Key Vote NO on the Consolidated Appropriations Act, H.R. 1625

On behalf of our activist community, I urge you to contact your senators and ask them to vote NO on the Consolidated Appropriations Act, H.R. 1625. The bill is the consolidated appropriations bill, which was written and subsequently pushed through the House an awful, secretive, and unfair process. On top of this, the bill spends – and wastes – taxpayer at the fiscally irresponsible levels authorized in the Bipartisan Budget Act of 2018.

House Majority Whip Steve Scalise (R-La.) told reporters earlier today that the government spending bill will be released late Tuesday evening, likely right before midnight. The House will vote on Thursday. The Senate will follow. As long as the bill isn't amended, the bill will subsequently go to the president's desk. But the process has cast a dark cloud for this spending bill. And the $1.3 trillion at which Congress will appropriate is also a reminder of a bad budget deal Congress recently passed.