You Can Lead a Citizen to Water...

I remember the Old Age — the time Before Obama.

We had cruel rulers who were so focused on wars and greed that they never shared a vital secret with their subjects. These latter-day Neros and Caligulae never once told the dessicated masses about a simple, life-giving treasure. The treasure of Water.

It was a dark time. A thirsty time.

The great unquenched responded this thirst with great confusion. Bewildered and beparched peasants would stuff their mouths with cotton, stones, even glass, for none had been told of the quenching power of Water.

But wealthy and powerful and aged men jealously guarded this aqueous secret. Precious aqua was diverted to fuel their war machines and their Wall Street.

But a Herald emerged from the Heartland. He heard the dry, croaky moans of his countrymen (and countrywomen!). Like a voice crying in the wilderness, he proclaimed: "Let me be clear: Drink water!"

They called this Herald “Hussein Obama.” H2O. His very initials the formula to quench a people's thirst for Hydrative Justice. At first, many were confused by this “water.” Is it a new weapon, a type of oxcart or something? What sorcery is this?

But slowly, fear was replaced with acceptance. As citizens touched the odorless, colorless treasure to their cracked lips, a sense of relief and wonder flooded the land. They celebrated Barack the Watergiver and installed him as their refreshing new chieftain.

Just five years on, we have begun to take water for granted. We almost expect to find water in every tap, river or stream in the land. But it was not always so. 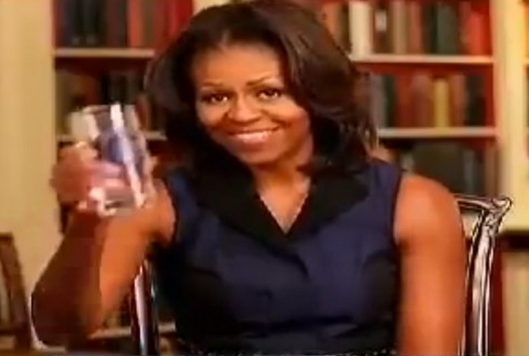 The wife of our Leader has found a new vocation to provide new meaning to her already remarkable life. Having reminded the citizenry to eat food and to move their body parts, she has now begun to travel the land reminding us to drink water.

This new Blessed Mother and her beautiful celebrity friends will remind us of our all-too-recent unquenched past.

“I’ve come to realize that if we were going to take just one step to make ourselves and our families healthier, probably the single best thing we could do is to simply drink more water. It’s as simple as that,” Obama said during a kick-off event at a high school in the aptly-named Watertown, Wis. “Drink just one more glass of water a day and you can make a real difference for your health, for your energy and the way that you feel.”

“Water is the first and best energy drink,” she told a crowd at a water festival outside the school. “I drink a ton of water.”

So drink your water, citizens. But before you do, remember those who once thirsted. And thank your government from which all life flows.