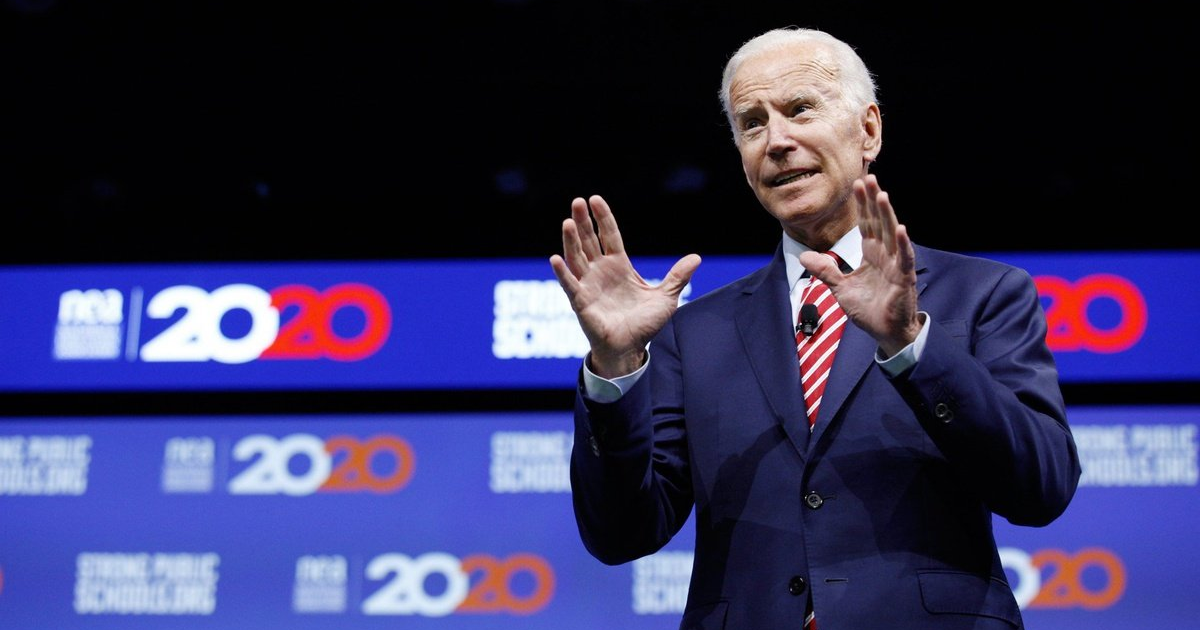 Biden is targeting higher-income earners because he has to pay for his proposed $5.37 trillion increase in federal spending. This estimate comes from a recently released model provided by the University of Pennsylvania’s Wharton School. (We’re aware of a loose estimate that puts Biden’s spending agenda closer to $10 trillion.)

Biden has proposed $3.38 trillion in tax increases, roughly 43 percent of which would come from changes in the corporate tax code. (Penn-Wharton doesn’t take macroeconomic effects into account, so the actual revenue under the proposed tax increase would be lower than the estimate.)

Almost 30 percent would come from changes in the payroll tax, such as eliminating the wage base. The remaining nearly 30 percent would come from proposed tax increases and changes in the individual tax code. The Tax Foundation estimates that Biden’s proposed tax increases would be the fifth-largest since 1940. The Tax Foundation estimates that Biden’s tax increases would increase revenues by $3.05 trillion on a static basis and $2.65 trillion on a dynamic basis.

In all, Biden’s proposals would increase the budget deficit by nearly $2 trillion over ten years. Because of the tax hikes Biden is proposing, there will be less investment in the economy, meaning fewer job opportunities for Americans.

Biden is proposing large increases in education and healthcare spending. He’s also proposing substantial increases in research and development spending for water infrastructure, high-speed rail, clean energy, and more. For our purposes, we’re focusing on Biden’s education and healthcare proposals, considering that these are the two biggest-ticket items, but we’re also going to touch on Biden’s plans for Social Security.

Biden would spend almost $1.93 trillion on education. His education proposal includes universal pre-K, which has been something that Democrats have been pushing for years. He also wants more money for Title I schools (schools that have a large number of low-income students), two years of “free” community college, and free college for low-income students.

When it comes to universal pre-K, Biden’s platform states, “Provide high-quality, universal pre-kindergarten for all three- and four -year-olds. For families with young children, finding highly quality pre-K is a major financial, logistical, and emotional burden, with potentially life-long consequences for their children. As President, Biden will work with states to offer pre-K for all three- and four-year-olds. This investment will ease the burden on our families, help close the achievement gap, promote the labor participation of parents who want to work, and lift our critical early childhood education workforce out of poverty.”

Universal pre-K may sound good, but Eric Boehm of Reason explains that “studies have found that most educational gains from early childhood education tend to wash out after a few years.” Specifically, a 2013 study front the Office of Planning, Research, and Evaluation at the Department of Health and Human Services found that “there were very few impacts found for either cohort in any of the four domains of cognitive, social-emotional, health and parenting practices” of Head Start, which promotes early learning, once children end 3rd grade.

Biden’s plans for higher education are problematic for two primary reasons. He wants to provide two years of “free” community college. (It’s worth noting that Congress effectively nationalized student loans in the Health Care and Education Reconciliation Act of 2010.) The first is that more government subsidies for college will make college more expensive. Granted, the expense won’t fall on students or their parents; it’ll fall on taxpayers. There’s already evidence of this. A study from the Federal Reserve Bank of New York estimated that the cost of college rises by 40 cents to 60 cents for every dollar that the federal government spends on education.

The second problem is that as the number of people graduating from college increases, it diminishes the usefulness of a college degree. Bryan Caplan calls this “credential inflation.” Caplan explains, “If everyone had a college degree, the result would be not great jobs for all, but runaway credential inflation. Trying to spread success with education spreads education but not success.”

Of course, we should make it easier for people to go to college, but more government involvement in the equation only makes it more expensive. There’s also a moral argument here. Students who take advantage of “free” college but don’t finish will owe nothing. (Obviously, there may be very valid reasons for not finishing.) That would be a waste of resources, but no skin in the game may encourage a student to drop out. A college education boosts income over the graduate’s lifetime. Why shouldn’t students be asked to pay for college?

Biden’s plans on healthcare would mean an eventual transition over to completely government-run healthcare. Biden wants to lower Medicare eligibility to age 60 from age 65. This would add 20.6 million more people to Medicare over the next five years. Medicare spending represented about 17.4 percent ($775 billion) of federal outlays in FY 2019. Spending for this program is already projected to grow rapidly, from 18.9 percent ($1.16 trillion) of all federal spending in FY 2031 to 19.2 percent ($2.1 trillion) in FY 2050.

Ultimately, healthcare costs have been rising because of the increased presence of third-party payers, including government programs like Medicare and Medicaid. Government programs now represent a higher percentage of national health expenditures than private insurance. This has consistently been the case since 2008. 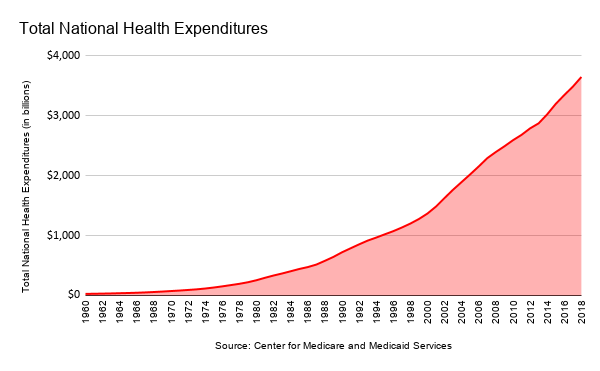 This is why a focus on health savings accounts (HSAs) and direct primary care are so important. If we’re ever going to bend the cost curve on healthcare, we must give individuals options that allow them to take control of their healthcare. Continuing the trend of increasing government’s role in healthcare will only continue to cause healthcare costs to rise. 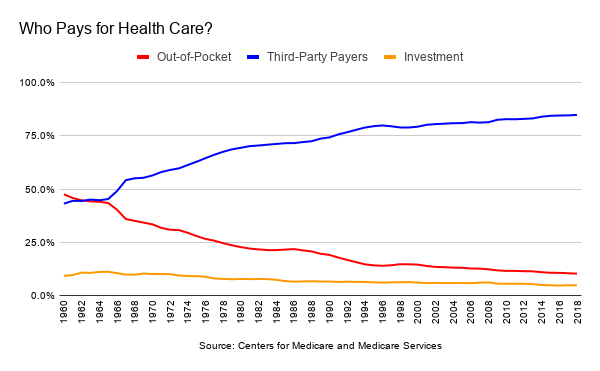 Under Biden’s plan, the individual tax cuts from the Tax Cuts and Jobs Act (TCJA) would be repealed and revert to the pre-TCJA top statutory tax rate of 39.6 percent, presumably for incomes above $400,000. Under current law, individuals whose AGI is between $400,000 and $510,300 in 2020 fall in the 35 percent statutory income tax bracket. Individuals with an AGI above $510,300 fall into the 37 percent statutory income tax bracket.

House Democrats have proposed an $18.9 trillion tax increase on all workers, regardless of income, to expand Social Security benefits. Biden would increase benefits and pay for the expansion in benefits by 12.4 percent payroll tax subject to wages above $400,000 annually, which funds Social Security benefits. Biden’s proposed changes to the payroll apply to employees and employers equally to incomes above $400,000.

By the way, it’s worth noting that Biden managed to avoid paying the payroll tax in 2017 and 2018, as Chris Jacobs explains, “by classifying the income as S-corporation profits rather than taxable wages.” Do as they say, not as they do.

Higher individual, corporate, capital gains, and dividends tax rates, as well as subject wages above $400,000 to the payroll tax, can’t be viewed on a static basis. Taxes reduce investment and discourage work. These changes will filter down to average Americans.

Still, Penn-Wharton estimates that Biden’s plan will increase gross domestic product (GDP) by 0.8 percent by 2050, or 30 years from now. This projected growth is not necessarily surprising given the very large role that the federal government would play in his domestic policy proposals. Government spending still counts toward GDP. That said, much of the Penn-Wharton’s boost in projected GDP growth appears to come from Biden’s immigration proposal. (Penn-Wharton projects a 1.7 percent increase in GDP by 2050 from Biden’s immigration plan. One can assume that without the immigration plan, there would be a decline in GDP.)

The Tax Foundation, whose analysis of Biden’s tax plan was partially used for this post, limits its estimate solely to the proposed changes in the tax code. “Biden’s plan would shrink the long-run size of the economy by 1.47 percent due to higher marginal tax rates on labor and capital,” the Tax Foundation notes, adding that it would also lead to 517,800 fewer full-time equivalent jobs.